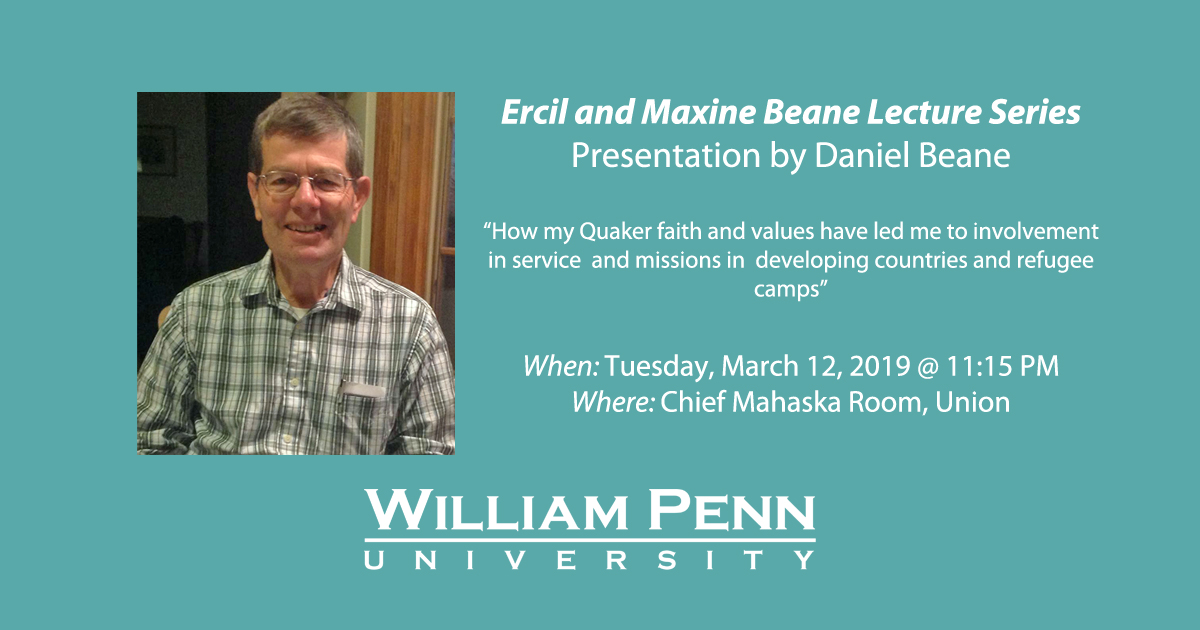 William Penn University will welcome Daniel Beane on Tuesday, March 12, 2019 as the 2019 Beane Lecture Series guest speaker. His lecture, titled “How My Quaker Faith and Values have Led Me to Involvement in Service and Missions in Developing Countries and Refugee Camps,” will be held at 11:15 a.m. in the Chief Mahaska Room in the Dana M. Atkins Memorial Union.

Daniel Beane is the son of Ercil and Maxine Beane. He was raised on a farm in central Iowa and in the fellowship of the Le Grand Friends Church. Daniel attended William Penn College and later earned his Bachelor of Science and MS in Agricultural Education from Iowa State University. As a conscientious objector, he volunteered to do his alternative service as a high school agriculture teacher at a Quaker school in Kenya. He taught school in Iowa for two years before returning to the family farm to spend the next 45 years farming with his wife and brother on a mixed grain and livestock farm.

For the past three years, he has spent his time in the Tongogara Refugee Camp in Zimbabwe to hear the refugee stories, to encourage the refugees and staff and understand the refugee situation to be able to bring awareness of their plight to Iowans. Daniel Beane has made a large difference from being involved with local rural churches set in the middle of the Iowa cornfields.

The Beane Lecture Series was established through an endowment by Ercil and Maxine Beane in 2008 to develop programs that engage students, faculty, and the community in discussions influenced by Quaker principles and philosophies. Through that endowment, a guest speaker is brought to William Penn University each year. Due to their commitment to kindness, generosity, and community. William Penn University is excited to have Daniel Beane be a part of the 2019 Beane Lecture Series. The lecture is open to the public.