(Oskaloosa, IA) – Five William Penn University students began Rob Hammann’s System Implementation course as strangers with various levels of experience writing code, but you wouldn’t have known it as they presented their final project at the end of the semester. The students confidently educated the audience on Agile Development techniques utilized in developing a much-needed app for families dealing with a rare genetic disorder.

Dr. Stephen Henderson, Associate Academic Dean and Chair of the Education Division is dedicated to student learning and growth at William Penn University. He is also the father of a young daughter, Estella, who was diagnosed at four months old with a rare genetic disorder. His professional and personal life intersected as he was able to work with William Penn students in developing a tool to help in the research for his daughter’s disorder. Estella has Alternating Hemiplegia of Childhood (AHC). It is a neurodevelopmental disorder characterized by repeated episodes of weakness or paralysis. It is highly variable and unpredictable, which is extremely difficult for the families of AHC children. The research and discovery for a cure has been slow, in part, because there has been no easy way to collect data from the episodes that children experience. Dr. Henderson worked with this team of student developers and their instructor to develop a way for parents and caregivers to record episodic information. Allowing data to be shared with doctors and research institutions with the ultimate goal of using the data to find a cure.

Utilizing the Agile Development technique allowed students to work collaboratively with Dr. Henderson in creating an AHC Episodic Recording app, known as E (for Estella). The app tracks episodes, including information such as physical symptoms, medications given, and other details that can be captured in one place and shared with physicians. Researchers at Duke, Harvard, University of Chicago, and Northwestern are studying AHC, but all lack a tracking tool such as this to aid in the collection of episodic data.

The students’ passion for this project was evident as they presented their app for the first time at the culmination of the class. This intensive, real-world experience of creating such an important tool was rewarding to all of the students involved.  They are deeply committed to this project and many of them will continue to work on the app even though their formal course is complete. Student, Kaung Htet Thar said, “I feel honored to work on this project, to help others in this AHC community.” Instructor, Rob Hammann, who also works as Software Engineering Manager at Vermeer Corporation, said of the class; “The transformation of this group of students from the beginning of the semester to last night has been one of the most dramatic I have witnessed… they pulled together and met and exceeded all expectations. The outcomes from this course will have a lasting impact on these students.”

Dr. Stephen Henderson, is active in the AHC community, serving as Secretary for the AHCF – Alternating Hemiplegia of Childhood Foundation Board of Directors. He is pleased that the students were affected by this course. However, the impact on AHC families is important as well. He is currently sharing the app with fellow Board members and Executive Committee members with hopes to release it to a limited number of people by the end of the summer. He shares, “For two years, I dreamt of making E a reality. This team of students brought that dream to life. E will empower caregivers, inform care for AHC children, and be a powerful tool for clinicians to see episode data. Thank you, Professor Hammann, Anibal, Kaung, Jace, Chimezie, and Carly. The AHC community will be forever grateful!” 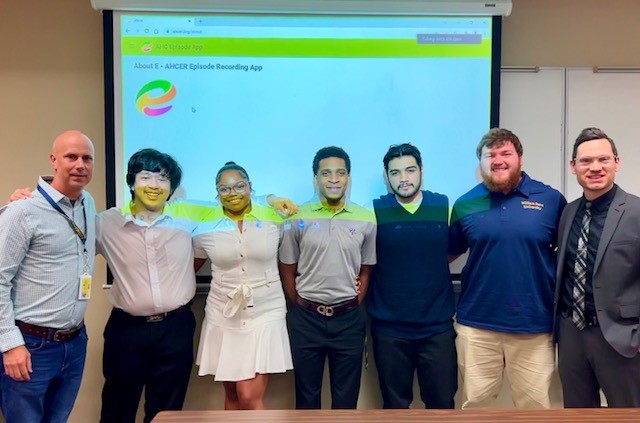