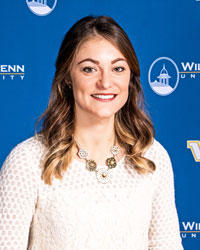 Cleaver, who becomes the 12th head coach in the program’s history, will come to WPU from Southwestern Community College in Creston where she served in the same position for the past two seasons.

“Throughout the interview process, it was clear that Coach Cleaver checked all the attributes on what we were wanting in our next Head Women’s Volleyball Coach,” Rule said.  “She understands recruiting, relationship-building, and the power of positive leadership –- all things that we are looking for in our program.  She also has an impactful ability to be a transformational leader which will enhance the areas we are doing well in the program and transform our performance on the court.”

While at Southwestern CC, Cleaver turned a struggling program around, taking the Spartans from 6-27 in her first year to 20-21 with her own recruits this fall.  Three of her players this year were named all-Iowa Community College Athletic Conference, while two collected NJCAA all-Region XI recognition.

Cleaver also served as both Director of Game Management and as a Residence Hall Director at Southwestern CC.

Cleaver has other prior coaching experience at the club level, co-founding and coaching the Illini Northwest Volleyball Club from 2013-2016.

“I am excited to be a part of this historic university,” Cleaver said.  “William Penn is known for its athletic success and to be the next head coach is an amazing opportunity.  I cannot wait to be a part of Statesmen Nation!”

Her collegiate career began at Roosevelt University as a two-sport athlete, also playing basketball.  Cleaver then transferred to Rock Valley Community College and was a starter and captain on the women’s basketball team that ended the season as national runners-up in 2013-2014.

Cleaver earned her Associate’s degree from Rock Valley CC in 2014 and then moved on to Upper Iowa University, where she obtained her Bachelor’s degree in 2016.  She finished her collegiate basketball career at Upper Iowa.

Cleaver takes over a young Statesmen squad that returns 16 letterwinners, highlighted by five starters, including second-team all-Heart of America Athletic Conference libero Ashley Miller.  William Penn was 12-25 this past fall with a 3-16 mark in the Heart.