Smooth, poetic, and passionate are some of the adjectives used to describe the music of Ray Blue, tenor saxophonist and William Penn alumnus. Blue is making an appearance on Thursday, October 11, 2018 to take part in this year’s homecoming celebrations! Join us as we welcome back, Ray Blue, class of 1972.

Blue will kick off the 2018 Homecoming festivities by performing live alongside Steve Johns, drums; Sharp Radway, Piano; Hill Green, Bass; and Jeff Barone, guitar. This concert will be held at the George Daily Auditorium on Thursday, October 11 beginning at 7 PM. It is free and open to the public. 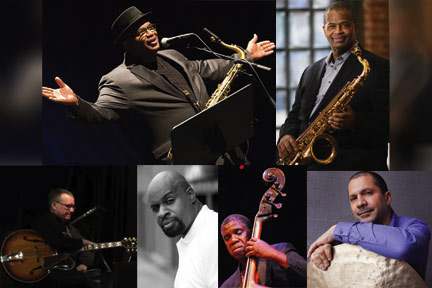 After earning his B.A. from William Penn University in 1972, Blue went on to earn an M.S. in Clinical Social work at the University of Iowa. The next decade was a period of intense study of his craft, from which he emerged as an accomplished composer, arranger and performer on tenor, alto and soprano saxophones.

He is the founder of Cross-Cultural Connection, Inc.–a non-profit organization that promotes jazz culture, performance, and education. At William Penn, the annual “The Ray Blue Jazz Award” is given to a graduating senior in Ray Blue’s honor.

Steve is dubbed one of the most dynamic and versatile drummers on both the New York City and international Jazz scenes. Since the early 1980’s he has performed and recorded with virtually the “Who’s Who” of the Jazz world. Steve has played with the Sonny Fortune Quartet, The Benny Carter Quartet, Jimmy Owens, Jimmy Heath, and many more.

Sharp is a self-taught pianist, as well as composer, arranger, and author, whose roots can be found in the church. Some of the recording artists he has worked with include Yusef, Paul West, Curtis Fuller, Diane Schur, Wycliffe Gordon, Ted Curson, Slide Hampton, and many others.

No stranger to the New York jazz scene, Hilliard Greene is a bassist who has been an active studio and stage player for many years. He served as music director for legendary vocalist, Jimmy Scott, for years. Hill has also played with Dave Douglas, Gloria Lynne, Charles Gayle, Rashied Ali, and other various international artists.

New York City guitarist, Jeff Barone, has developed a strong reputation with his recordings, live performances, and record producing. Having previously worked with Tom Harrells Quintet, along with groups led by Bobby Caldwell, Reuben Wilson, Joe Magnarelli, and Eddie Montiero. Jeff has performed at Carnegie Hall and the JVC Jazz Festival, to name a few. He also has worked in various Broadway shows like Cats and Wicked. In 2008, he was featured on the cover of Just Jazz Guitar Magazine.