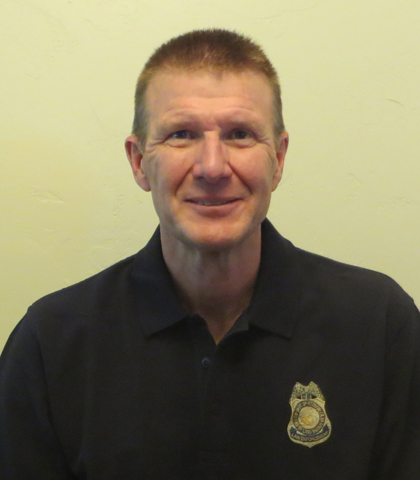 William Penn Alum, Mike Miller, graduated in 1979 with a Business Administration degree with a minor in Economics. He is originally from Madrid, Iowa. As a Statesmen, he was a member of the wrestling team for a season and became a brother of Sigma Phi Sigma fraternity where he served as Vice President among other positions. Mike has a resume that is not only impressive but filled with service and accomplishment in law enforcement.

To further his education, Mike attended Colorado University, where he later graduated from the accounting program. In 1983, he was hired by the Internal Revenue Service (IRS) where he started his federal law enforcement career. At the IRS, he received training for Special Agent Investigations and Criminal Investigations. He examines violations of income tax laws and other types of fraud against the government.  In addition, he has performed surveillances, armed escorts, and details to the Secret Service during presidential elections. Mike served as an On-the-Job Instructor training new special agents.

Transferring to the U.S. Department of Energy in 1988, he worked in the Office of the Inspector General as a Senior Special Agent. He reviewed fraud, waste and abuse cases in the Department of Energy (DOE).  He worked cases involving contract fraud, conflicts of interest, embezzlements, theft and environmental crimes. The Denver Field Office is where Mike led the investigations at the Rocky Flats Plant, the Western Area Power Administration, the Solar Energy Research Institute in Colorado, and the Naval Petroleum Reserve in Wyoming.  As the Senior Special Agent, he managed the case load for the office and supervised two special agents.

In 1992, Mike started his career with the Bureau of Land Management (BLM) in Casper, Wyoming, where he served for 17 years until the end of his career. As special agent, he was given the task of establishing the Casper Field Office. The office was entrusted with the duty of inspecting violations of Federal Land Policy and Management, plus the enforcement of the Archeological Resource Protection Act. He also worked cases relating to environmental crimes, minerals fraud, fossil theft, wild horses, grazing, resource destruction, and fraud. He later developed a training course in hazmat investigations.

The Bureau of Land Management also provided Mike with other memorable opportunities. “Being part of the detail from the BLM assigned to the 1996 Summer Olympics in Atlanta was fantastic. We were assigned to the Olympic Stadium and the baseball field.  I saw opening ceremonies including Muhammad Ali lighting the Olympic torch, track and field, and the closing ceremonies.”

The Bureau of Land Management promoted Mike to Special Agent-in-Charge for the state of Wyoming in 2001.  He directed a law enforcement program, and was in charge of protecting public land covering approximately 18.4 million surface acres and 41.6 million acres of sub-surface mineral estate. Covering that vast territory was a challenge for a small platoon of three officers and increasing that number was a priority for Mike. Through education, he promoted the law enforcement ranger program to the field office managers.  He helped instruct Law Enforcement for Managers and Introduction to Resource Protection classes.  As a result of this efforts, the BOE increased to nine rangers throughout the state of Wyoming.

Mike’s experience and expertise was very well respected. He was asked to serve on many special details and committees. “I represented the Bureau of Land Management on the U.S. Attorney’s Law Enforcement Coordinating Committee and Joint Terrorism Task Force working with various federal agencies. I provided a number of presentations to Sheriff’s Associations at the state level relative to the land use mission of the BLM and how the law enforcement program interacts with the county sheriff departments. I was on the technical program review teams that reviewed three different BLM law enforcement programs (Oregon, Montana and Alaska). I did a two month detail as Acting SAC in Alaska.”

The Bureau of Land Management determined that the increased activity in the exploration and production of oil and gas in the Western States had led to significant increases of theft and/or vandalism of equipment and property. Special Agent Miller was tasked with creating a Special Investigations Group for the BLM to investigate mineral issues, primarily oil and gas on public lands. Consequently, Mike oversaw 700 million acres of sub-surface mineral estate, a vast amount of territory.  The importance of the office was magnified because oil and gas facilities and pipelines had been targets of terrorist activities in the past and would probably continue to be in the future.

Continuing education and special training was the norm for Mike in his lengthy and diverse career. “William Penn College taught me how to learn and to complete assignments, which was invaluable in the special schools and training I did for my career.” He successfully completed training in 17 different areas. A few include: Criminal Investigations, International Terrorism and the Islamic Terrorist, IRS Special Agent Investigations, Advanced Air Operations and Night Tactics, National Wildfire Investigations.

During Mike’s career he has distinguished himself by winning awards in two government agencies, the Department of Energy and the Bureau of Land Management. He has been recognized in different capacities on 19 different occasions. Honors include, the Special Act of Service Award and a two time recipient of the Award for Superior Job Performance while working in the DOE. The BLM twice awarded Mike the Superior Service Award and the Special Act in Service Award. He has been recognized for his quality of work and on the spot decision making several times. In 2009, he won the Star Award for Excellent Job Performance for his entire career.

When Mike retired in 2009, his office was carrying a case load of over 15 investigations. In retirement, Mike has been living in Star Valley, Wyoming about 50 miles South of Jackson, Wyoming.  He is particularly proud that he has been married for 40 years to his wife Kim. Mike and Kim have two sons who are teachers and coaches. He is an avid outdoorsman who enjoys bicycling, hiking, fishing, and hunting. He also enjoys teaching spin class, working out, and traveling with his family and friends.

William Penn University wishes to thank Mike for his service to our country, congratulate him on a stellar career, and send our best wishes on his retirement.